Bronx explosion killed a battalion chief during an investigation 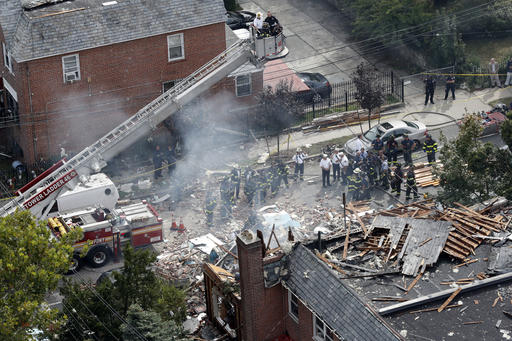 Emergency service personnel work at the scene of a house explosion, Tuesday, Sept. 27, 2016, in the Bronx borough of New York. New York City firefighter Michael Fahy, who responded to a report of a gas leak at the home was killed Tuesday morning when the residence exploded shortly after authorities discovered a possible drug lab there, officials said. (AP Photo/Mary Altaffer)

NEW YORK (AP) — The New York Police Department says it's questioning a man in connection with a Bronx house explosion that killed a fire battalion chief.

Chief Michael Fahy, a 17-year fire department veteran and father of three, was killed by falling debris on Tuesday morning while directing operations from the street.

He was supervising an evacuation following a report of a gas leak. Authorities are looking into whether the building was being used to grow marijuana.

The two-story house and adjoining homes had already been evacuated and fire personnel had been on the scene for an hour when the 7:30 a.m. blast jolted neighbors awake. It tore off the building's roof and hurled pieces of wood and brick into the street.