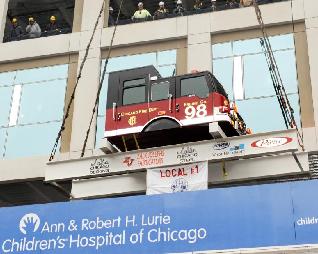 Pierce Manufacturing Inc. created and donated this handicapped-accessible fire truck cab to provide interactive entertainment for children in the hospital.


A custom designed, child-friendly Pierce fire truck cab was lifted 213 feet, by crane, onto the 12th floor of the hospital, which is currently under construction on the campus of Northwestern University’s Feinberg School of Medicine. Pierce created and donated the handicapped-accessible fire truck cab to provide interactive fire safety education and entertainment for children in the hospital.

“Pierce Manufacturing has donated this full size cab because of the powerful connection between children and fire trucks. It’s as simple as that,” said Robert Bohn, Oshkosh Corporation chairman and chief executive officer. “When Lurie Children’s opens, we’re confident that this cab will be one of the busiest and hardest working vehicles we’ve ever produced.”

Lurie Children’s will open in the summer of 2012, and the Pierce fire truck cab is the first custom-designed feature to be included in its unique interior design that will celebrate Chicago’s vibrant history and culture. The hospital is partnering with 20 of the city’s top civic and cultural organizations to help create healing environments and opportunities for education and exploration for patients throughout the hospital.

The Chicago Fire Department was also honored for its role as first responders for Chicago’s children. “It’s a great thing that kids will be using this display to explore the world of firefighting and feel a bit closer to the men and women who have made it a career to keep our kids safe from fire and many other perils,” said Commissioner Brooks.

Lurie Children’s is located at 225 East Chicago Avenue and connected by a bridge to Prentice Women’s Hospital. The 23-story facility will feature 288 beds in all-private rooms, increased space for clinical research and trauma care, and the capability to accommodate the newest advances in technology and equipment.

“With Ann & Robert H. Lurie Children's Hospital of Chicago, we have the opportunity to create a hospital that enhances collaborations with our clinical and academic partners in a facility that embodies our philosophy of family-centered care. We are grateful to Pierce Manufacturing for this magnificent gift to Lurie Children’s and the children of Chicago,” said Tom Sullivan, President of Children’s Memorial Foundation.