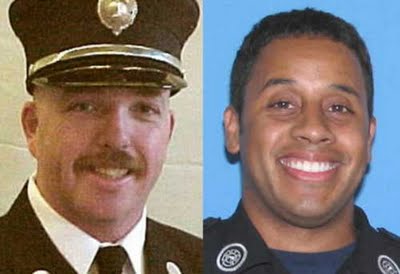 Raw Video from the Scene Buffalo firefighters salute as they remove bodies of fellow firefighters from a building after a fire in Buffalo, N.Y., Monday, Aug. 24, 2009. The first floor of a burning convenience store collapsed into the basement early Monday morning, killing two firefighters. (AP Photo/ David Duprey)

Two firefighters -- one searching for a person reported to be trapped and the other responding to a mayday call -- plunged through the collapsed first floor of a burning building and died early Monday.

Rescue crews tried repeatedly to get to the two fallen firefighters, but were beaten back by fire and further collapses inside the corner brick building, Commissioner Michael Lombardo said.

The first firefighter to fall through the floor, Lt. Charles "Chip" McCarthy, was a 22-year veteran of the Buffalo Fire Department who was assigned to a team whose members are trained to find and free trapped victims.

He had depleted one oxygen tank, came out to replace it and then re-entered the building just before the accident happened, said firefighter Vincent Gugliuzza, vice president of Local 282, Buffalo Professional Firefighters Association.

He pressed a distress button on his radio and radioed for help, saying, "Basement, I'm in the basement," said Daniel Cunningham, president of the firefighters union.

Firefighter Jonathan Croom, who was working on his scheduled day off, responded to McCarthy's mayday call and also fell through the collapsed floor, Cunningham said.

Firefighters continued to search the building Monday afternoon but had not yet determined whether anyone else was still inside, officials said.

The fire at the Super Speedy deli in a working-class neighborhood on the city's east side was reported just before 4 a.m. Flag-draped stretchers carrying the bodies were brought out of the two-story building shortly before 10 a.m. as fellow firefighters, some saluting, lined up and took off their helmets. Weeping and distraught people believed to be relatives had been escorted from the scene moments earlier.

Firefighters were still pouring water on the gutted building hours after the blaze began. The fire's cause was under investigation.

McCarthy was a 45-year-old married father of three. Croom, 34, had been in the department for 10 years and leaves behind a fiance and the couple's 9-month-old child. He was working on overtime on his day off to cover a staffing shortage, Cunningham said.

The two were among the first firefighters on the scene, Lombardo said.

"The hearts of the Buffalo Fire Department are broken," said Lombardo, who knew both of the victims. "This is a family and we lost two members of our family today."

The last Buffalo firefighter killed in the line of duty was 31-year-old Michael Seguin, who died July 4, 1997, when a roof collapsed during a house fire.

The last time more than one Buffalo firefighter died in the line of duty was on Dec. 27, 1983, when five firefighters were killed in a propane tank explosion at a warehouse _ the worst loss of life in the department's 129-year history.

"I've been on 36 years and seen every situation happen. We still do what we have to do," said Fire Chief John McFeely. "It's always very, very tragic. The guys are so close together, but we've got a job to do. In another half an hour, if there's another fire down the street, we'll be there."

Permalink Reply by Jay Lowry on August 26, 2009 at 12:29am
Chris, Are you serious? This thread is about funerals. People are leaving their condolences for these men, these heroes and you are posting this now? Do you think the families want to come on here and see this thrown up in the midst of a thread about funerals? We came to this thread to remember two men who died in the line of duty and not to push content on people this way. It would be far better if you just took the time to thank these men for their service and to offer thoughts and prayers to the families.

May god bless the families of these brave men and the firefighters who proteect the City of Buffalo. God protect them from experts.

Permalink Reply by Heidi M. Joiner on August 26, 2009 at 1:24am
Thoughts and prayers to his immediate and fire families. Go with God, rest in honor and peace.

Permalink Reply by Art "ChiefReason" Goodrich on August 26, 2009 at 9:20am
The dead they sleep a long, long sleep;
The dead they rest, and their rest is deep;
The dead have peace, but the living weep.
~Samuel Hoffenstein

Permalink Reply by Mindy Cloud on August 26, 2009 at 11:56am
To the family and work family of the two fallen firefighters, I am so sorry for your loss. Your loved ones will never be forgotten. Heroes never are. God bless you all!

Permalink Reply by Dan Curtis on August 26, 2009 at 6:49pm
On behalf of the Bowmansville Fire Co (Lancaster NY) we send our deepest condolences to the families of our fallen Brothers. It is heart warming to see the outpouring of love from the Fraternity that we know as the Brotherhood of Firefighters.No greater a sacrafice then a man lay down his life for another. God Bless all of us and keep us safe.
EMS Lt/Chaplain Daniel Curtis Bowmansville Fire Association

Permalink Reply by sarah arledge on August 26, 2009 at 8:56pm
i am so sorry about the firemen that died i will pray for their family god bless them

Permalink Reply by patty prime on August 26, 2009 at 9:29pm
My thoughts and deepest prayers are with all the families of the 2 fallen firefighters..May God be with you...They were called, why we don't know, family can't understand...
To our Brother and Sister firefighters in Buffalo..May the guardian angels be with you all..Keeping you safe..When something like this happens, it weighs heavy on all our hearts..May each day become easier for you.
Be safe..

Permalink Reply by Harry Rogers on August 27, 2009 at 7:28am
Rest in peace brothers! You and your families will be in my prayers!