FROSTBURG, Md. (WUSA) - Frostburg's Fire Chief Nathan Blubaugh told 9 News Now despite claims that the firefighters' response was slow and ineffective they did everything they could to save Evan Kullberg, and Alyssa Salazar from a fire earlier this month. 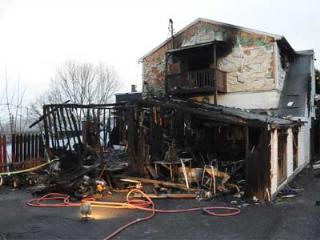 He said, "Several attempts to enter the rear of the structure were made but due to the intense smoke and flames present it was deemed in-accesable and other options had to be found to gain access to that area."

Chief Blubaugh said the firefighters inability to rescue the victims had nothing to with response times, but had everything to do with the heavy flames and smoke coming out of the building.

In addition he said, "The Frostburg Fire Department is a 100% volunteer organization and the stations are not manned. At the time of the call members responded from their own homes to the fire house and then manned the apparatus and responded to the scene."

Permalink Reply by Ben Waller on December 30, 2010 at 6:47pm
There are windows visible on the sides. Did anyone think about VES?

Permalink Reply by lutan1 on December 30, 2010 at 7:12pm
The reality of what we do is that not everyone can be saved. The response is not a news worthy item- they did what they could, with the resources they had, in the timeframe available to them. Even with the loss of life, I still say they did a good job....

Permalink Reply by Ben Waller on December 31, 2010 at 6:29pm
There are ways to exempt 911 tapes from FOIA requests. One is that if there is a possibility that the tapes will be used as evidence in a court case, the tapes may be protected as evidence and also to prevent possible contamination of a local jury pool.

Permalink Reply by John Crabbe on December 31, 2010 at 8:57pm
Absolutely Ben. Here in WI there have been 2 incidents where 911 tapes were an issue, one was the case I described above, the other is a murder case involving a coed in Madison. With that case the 911 tapes became part of the evidence and hence not released until the investigation was over. Afterwards though, they are still public record.

In the case here, I can understand the fact of the tapes being public record, if there is no reason to hold the tapes for investigative purposes, there really isn't much the 911 center can to to not release them. I don't think you are going to see this incident as a court case, and my hunch is the investigators thought so as well, so in the end the call center has to abide by public record.

Permalink Reply by Ben Waller on January 1, 2011 at 7:26am
Where I work, every traumatic fatality is considered a crime scene until proven otherwise. That puts the tapes into the "don't release/FOIA exempt" category, at least until the investigation is complete.

Permalink Reply by ASSTCHIEF173 on January 1, 2011 at 8:48pm
This call was a tragedy for all who were involved ! I was there officer on the 4th in engine, There were 2 engines and a ladder truck on the scene within 9 minutes. Follow by 3 more engines within the next 5 minutes.

All i will say at this time is a great job was done by all of the firefighters on the scene we did everything we could do but somtimes it is just not enough .

Sorry to hear about the loss, the 911 call is heart wrenching to listen to and I am sure like any firefighter in the service, that your personnel did everything possible to mount a rescue.

You are correct, we (all of us) are human and we simply can't rescue everyone. There are times we do (right place and right time) and then there are those times that the cards are stacked against us. (out of our control).

God bless the victims, their families and may your personnel find the strength to carry on, as others in your response district are counting on you for the next fire.