Abbotsford, WI Fire Dept. responded to a structure fire at the theatre and called in 3 other departments for mutural aid.  After conditions deterriorated, a decision was made to pull crews from the inside and go defensice. Unfortunately, before all personnel could evacuate, the roof collapsed trapping 4 inside. After getting the members out and transported to the hospital, one of the firefighters has died of his injuries. The firefighter was a member of one of the mutual aid departments that was called to the scene. The initial four trapped was a member of the Abbotsford Fire Dept as well as 3 from one of the mutual aid departments.  One news agency is reporting a press conference will be held sometime today with more information.

This is a shame and very sad.

I do think this will be a fire that will have some lessons learned. There were some pictures a bystander posted on Facebook which gives a good chronological events, capturing pics from even before crews arrived on scene.

rest in peice brother! I read he was also a Sheriff Deputy in Marathon County.  Sad day in all of public safety

If one checks out the Statter link at the bottom of the news story link provided by the webteam, you should be able to view the pics from the Facebook page.

Update:  The Firefighter has been identified as Colby Fire Lt. Jamison Kampmeyer  Age 34.  Leaves behind a wife and 3 kids. He was also an officer with the Marathon County Sheriff's Dept. and was also one of their Swat Team Medics.

Here is a photo of him. 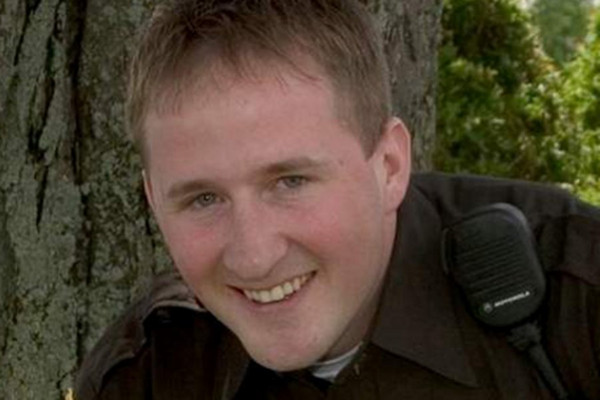 Funeral arrangements announced today from the Sheriff's Dept.:  Wake on Thursday from 4-8 P.M. in Colby and the Funeral Friday starting at 11 A.M. in Colby.  May he rest in peace.

On my local 10 P.M. (central time) news on 3/9/2012, it was announced that the ATF has ruled the fire that killed the Colby Firefighter as Accidental. They have narrowed it down to the lobby as to where the fire started but have not said what exactly was the cause. Also on the new, the local news had a crew at the funeral on 3/9/2012 and reported over 250 emergency vehicles from a total of 3 states as  well as over 1000 personnel were at the funeral. This does not include all the citizens who showed up to pay their respects.

Link to results of the NIOSH report

Link to pictures taken by bystander on day of the incident. I would like to note the PPV fans being placed in pic 55 to 57. Watch the chronological progression of the fire, smoke, etc from the pics until the FFs are out,  and use that to train and to not let these results happen again.