WILMINGTON, Calif. -- After working to extinguish a stubborn Wilmington auto scrap yard fire since Saturday, firefighters say they expect the fire to be out by Sunday sundown.

The fire broke out Saturday morning on the 1900 block of North Blinn Avenue. Fire officials say employees at the scrap yard were moving salvaged metals when they hit flammable liquids, sparking the blaze.

A commander at the scene said that water supplies in the area were lacking and the shortage was delaying the firefighters' efforts to kill the fire.

Authorities reported that 16 fire companies, 4 rescue teams, 1 EMS Capt, and 2 battlion chiefs were at the scene of the scorcher Saturday morning. All these companies were added after memebers of Fire Station 38 reported a loom-up in the vacinity of a rubbish fire call they were responding to. By Saturday afternoon and into the night, over 250 firefighters were on-scene from several different agencies. The Los Angeles City Fire Department was assisted by; Los Angeles County Fire, Long Beach Fire, and Manhattan Beach Fire.

By around 4 p.m. Sunday, the original assignment and most other units were releaved by other units from the departments involved. Also, firefighters said they had "a good handle on the fire" and were "making good headway."

Fire officials said that firefighters will likely remain on scene through Sunday night to prevent rekindle and to ensure safety.

No adjacent structures were threatened, and one firefighter and one civilian were reported injured.

Health officials meantime are monitoring air quality in the area. They're urging people nearby to stay indoors.

Below are the LAFD alerts which are received either by email or text to advice the public and volunteers on major incedents:

*UPDATE: 1903 N. Blinn Av.* Fire-fight continues on aprox 1 acre of smoldering
material at a "Pick Your Part". Knockdown anticipated this afternoon. Additional
bulldozers requested to move material, assisting FF to access the seat of the
fire. No structures damaged. No injuries today. Cause is under investigation &
$Loss is undetermined. NFD. 6/6/10 @ 10:55 AM 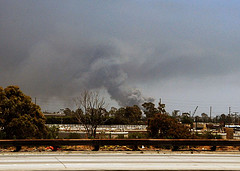 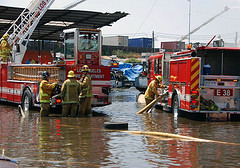 Water...Finaly, only its in the wrong place! western side of fire 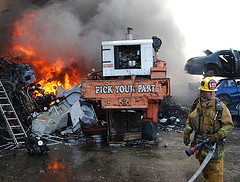 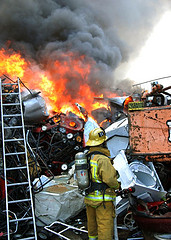 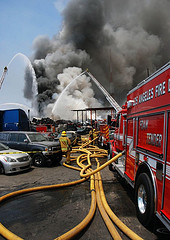 so much 4" supply line 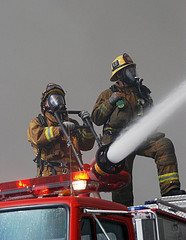