ROSEVILLE, Calif. - A fire that erupted during a police standoff at a suburban Sacramento mall did more than destroy part of a regional shopping hub. It also provided an economic setback to a region of Northern California struggling to emerge from recession. 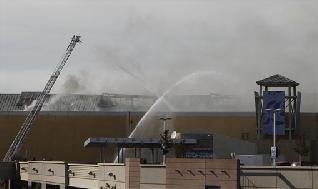 Firefighters pour water on to the roof of the Roseville Galleria after a man entered a store earlier in the day and set the shop on fire in Roseville, Calif., Thursday, Oct. 21, 2010.(AP Photo/Rich Pedroncelli) 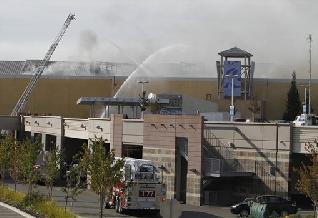 City leaders in Roseville, about 17 miles east of the state capital, pledged to make a speedy recovery after the Roseville Galleria was set ablaze just as the stores were gearing up for the crucial holiday shopping season.

Police descended on the mall at midmorning Thursday when a man claiming to have a gun entered the video game store GameStop and told employees to get out. Police said he barricaded himself inside and started the fire.

"He was saying stuff about his family. The staff from GameStop was saying he was more or less incoherent," Roseville Police Lt. Mike Doane said. He was hiding outside the store without a weapon when a SWAT team later arrested him.

The blaze damaged an entire arm of the Galleria. Much of it was charred and gutted after fire crews spent hours battling thick, black smoke. Smoke and water damage were thought to be extensive throughout the rest of the sprawling complex.

No injuries were reported. The mall had been evacuated by the time the fire erupted and spread to the roof.

Roseville police identified the suspect as 23-year-old Alexander Corney Pigee, but the Placer County Jail records have the spelling as Piggee. It said he was booked into the jail on charges that include burglary and arson.

The 1.3 million-square-foot Galleria generated about $3.2 million for the city in annual sales tax revenue and could be closed or limited in operations for months.

Roseville Mayor Gina Garbolino said the mall was not only an economic driver to a metropolitan region with a 12.4 percent unemployment rate, but served as a focal point for the community. She pledged that city leaders and the mall's management will work together to "get this mall working as fast as we can, people back on their jobs, people shopping here."

The 240-store mall, operated by Westfield Corp., was built in 2000 and includes a Nordstrom and Macy's. It underwent a $270 million expansion that was completed in 2008, adding Louis Vuitton, Tiffany, Burberry and other high-end stores.

Westfield Group spokeswoman Katy Dickey said there were no estimates yet on the cost of the damage.

"Any time you have a retail operation of that size stop for any period of time, it's going to have a significant impact on the local economy," said Michael Faust, senior vice president for public policy and economic development at the Sacramento Metro Chamber.

The fire burned a wing of the high-end mall that appeared to extend several hundred yards between two anchor tenants, Macy's and J.C. Penney, said Roseville Fire Department spokesman Dennis Mathisen. He said water and smoke damage were extensive beyond that wing.

Authorities had thought the mall's sprinkler system had doused the blaze. Before the larger fire erupted, police had detained Pigee and were checking a backpack they found to see if it contained explosives.

Police later said the fire began spreading as members of the bomb squad were examining the backpack, forcing them to flee the building.

Mathisen said fire sprinklers seemed to be controlling the flames, but firefighters had not been allowed in.

KCRA-3 in Sacramento interviewed Pigee's mother, who said she told him to move out of the family house several months ago because he was old enough to live on his own. Since then, he had been rotating among family members, said the woman, Mary Carter.

"He wasn't a bad kid. I don't know what happened," she told KCRA.

Permalink Reply by Jack/dt on October 21, 2010 at 5:52pm
Maybe the Mall didn't pay their subscription fee.