Most engines come equipped with a wheel chock mount.

OSHA Requirement 1910.178(k)(1) states, "The brakes of highway trucks shall be set and wheel chocks placed under the rear wheels to prevent the trucks from rolling while they are boarded with powered industrial trucks.

Two wheel chocks, mounted in readily accessible locations, each designed to hold the fully loaded apparatus on a 10 percent grade with the transmission in neutral and the parking brake released.

1. Do you use them regardless of whether you are on a grade?

2. What do you do to remind you that you "chocked" the tires?

3. Do you tether your chock to the engine to prevent loss?

4. Any insight about how to correctly use a wheel chock? 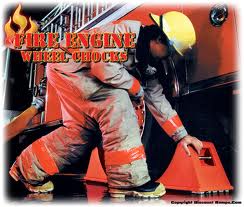 Permalink Reply by Moose on May 18, 2011 at 3:17pm
Hey Robert, not for nothing, and not to start an argument but here is my take on this little issue...
You asked a direct question of the members, and even stated clearly "This might seem like a smart ass comment but here is a question"
Than, a respected and knowledgeable member of the site offers an answer for your question, and you say what you did??? Were you realy asking a question or just trying to start something?
Chief Waller has never given a cocky attitude and never bullied anyone on this site. He has always offered great insight and advice to all, and I hope he continues to despite childish comments and acts such as yours. Please, if you are going to contribute than do so, dont seek out petty arguments with people who may have proven you wrong in past threads.
Stay Safe and Saty Open Minded to answers given to your direct questions brother.

Permalink Reply by Paul Spencer on May 18, 2011 at 3:48pm
Wow, not to add smoke to the thunderstorm here but... Please remember our industry has over 200 years of tradition. The tradition in our industry for centuries was to leave the brakes off when in the barn so if the barn caught fire (remember the steamers were run by a fired boiler) the engine could be pulled out of the fire. Even into my career some engine companies kept the SOP that air brakes were not applied. Usually a small wood chock would be placed on the floor to keep it from moving. Today, especially in the earthquake prone area I am in we all have an SOP to apply our park brakes when in station. I believe a wheel chock is used as an operational backup for human or mechanical failure.

First, I challenge you to show me where I said that I ever said that anyone was wrong about how and when they mask up. I did point out some considerations and potential problems with the way that you do it.

Second, I didn't say that I can't do something the way you do it. You're just making that one up. I'm not mad, and you're doing things that I chose to NOT do - intentionally, and after giving it careful consideration, because masking up on the rig wastes air that may mean the difference between surviving and dying in a MAYDAY situation, and not using wheel chocks outside the station is indeed a different situation than not using them in the bay.

Then you used at least two logical fallacies in your last statement. The first is your repeated straw man about me supposedly thinking something is "wrong" because I don't or can't do it that way. Yeah, right, I suppose it's physically impossible for me to put down a set of wheel chocks when the appratus isn't running. Did you REALLY mean to say that??? The other logical fallacy in your final statement is a red herring - the comment about the open mind and your generalization about the world. Oops, I missed one. You actually used a third logical fallacy in that last comment - an ad hominem.

Robert, it's laughable that you insist so strongly on putting words in my mouth and of having a closed mind simply because I disagree with your closed-minded positions. Do I need to roll out my "irony" face again?

First, I don't post at all in most of the FFN forums.

Second, I challenge you to show me even a couple of times when I told anyone that they were wrong and I was right, let alone "...in just about everyone of them..." Feel free to post a link if you find the evidence you claim that you have.

Third, your last sentence is a straw man logical fallacy. I have never said that nor thought it. YOU did.

"It has nothing to do with having the same back grounds, it has everything to do with bringing something productive to the table...I read alot of these forums, and in just about everyone of them you are telling someone they are wrong and you are right...

Its cool, must be tought being smarter than everyone."


Discussing the reasons for doing things one way or another ARE productive. That's why I discuss considerations about whether certain things are better practices than others, and it's why I discuss why some practices are more dangerous than others. Discussion is the entire point here. This is a "forum", as you stated. "Forum" means an open exchange of ideas. It does NOT mean "Everyone must agree with Robert or he'll put words into their mouth."

Now feel free to show me where I've told you - or anyone else - that they were "wrong" and that I was "right".
You know, post a link to something that I actually said instead of something that you just made up???

Permalink Reply by Tom Wallace on May 19, 2011 at 1:49pm
yes our quints wheels also stay on the ground

Permalink Reply by Michael A on May 19, 2011 at 2:52pm
Our policy is the engine/pumper (whatever you want to call it) gets chocked 1 in front and 1 in rear of the back tire. Chief is a stickler to it and will let you "know" if you forget.

Permalink Reply by Mike Schlags (Captain Busy) Retd on May 19, 2011 at 3:34pm
Hey Robert, Gee, who would have thought a discussion about wheel chock use could generate this much hostility. First off, I want to share with you that Ben is a friend of mine outside of the FFN. If you only knew how brilliant this man is. I lost count at the number of master degree's he possesses or his ground breaking (pun intended) work on the development of nationwide USAR team, swift water rescue and NFPA committee projects and policies. He truly puts his money where his mouth is and I would caution you to be careful here. Ben, in fact is right. It's pissed me off to no end a couple of times but I'm mature and confident enough to admit that I was wrong or just needed additional education. Don't mistake the bantering between Chief Waller and Jack for example to be real. This is just an example of two bright minds having fun on the internet. You know, the social side of FFN? For me, it's like watching two brothers or let's see, it's like watching two firefighters give each other shit at the fire station. No big deal, just entertaining sometimes. But it's not real Robert. Don't broad brush your opinion of Ben, just like anyone else until you have the complete 360˚ walk around the issue covered. You might be surprised at the resources available at your fingertips if you chill just a little and concentrate on being nice. Relationship's with folks like Ben is worth the effort.

Permalink Reply by Ben Waller on May 20, 2011 at 9:35pm
Mike, thanks for the comments, but I do need to point out that your points more appropriately apply to the entire command staff of my department than to just me. On the other hand, I know how brilliant I am, and that's not so much. I hope I show some common sense and the ability to reverse-engineer problems to determine how to really fix them at the most basic levels. That's not really brilliance - it's just the ability to recognize how much I don't know. Also, I knew enough to chock the engine's wheels and to avoid wasting my cylinder air sitting in the jumpseat a long time before I attended grad school.

As for Jack and me, I don't disagree with him on a lot of things, and when we do disagree it's usually when he either generalizes me into some group that exists only in his head or when he starts spouting some lefty extremist rhetoric in lieu of that logic for which he's otherwise so legendary here. :-)

And in case I didn't tell you well enough today, relationships with people like you are well worth the effort, too.

Permalink Reply by Stiffler1705L266 on May 21, 2011 at 1:01am
1. Do you use them regardless of whether you are on a grade?
Our SOG says use a wheel chalk everytime you put the truck in park and get out. Does it happen on every call...NO. Am I guilty of not using it on every call....YEP. I always use whenever im on a hill, but should be using it everytime like I was taught as a rookie.

2. What do you do to remind you that you "chocked" the tires?
On the pumper or ladder truck I always leave a compartment door open.

3. Do you tether your chock to the engine to prevent loss?
No

4. Any insight about how to correctly use a wheel chock?
I put it behing the wheel on the down hill side. ;)

What do you do to remind you that you "chocked" the tires?
A walk around of your apparatus everytime you get in it to move it should solve that.

Do you tether your chock to the engine to prevent loss?
No, if you leave it you didnt do a walk around and then you hear from your Capt.

Any insight about how to correctly use wheel chock?
One in front one in back no matter the grade. If you only have one place it on the down hill side unless pumping then it goes in front.

NFPA 1901 recommends using (2) wheel chocks, do you?
If the apparatus has two we use both.

Permalink Reply by Jack/dt on May 23, 2011 at 8:41pm
...he either generalizes me into some group that exists only in his head or when he starts spouting some lefty extremist rhetoric in lieu of that logic for which he's otherwise so legendary here. :-)

I'll let all that slide since you included a smiley face.