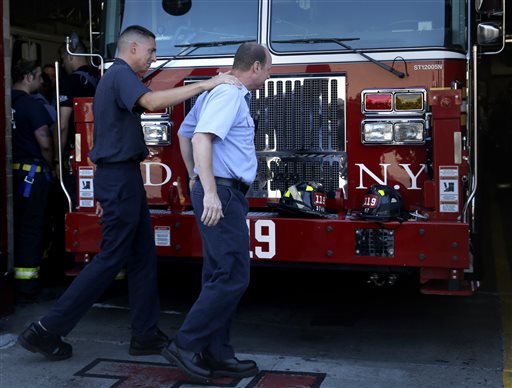 Firefighters comfort one another after bunting was hung in honor of Lt. Gordon Ambelas in New York, Sunday, July 6, 2014. The Fire Department of New York is mourning the death of Ambelas, who became trapped while looking for victims in a public-housing high-rise blaze, the first to die in the line of duty in more than two years. Ambelas died Saturday after suffering multiple injuries while on the 19th floor of the 21-story building in the Williamsburg section of Brooklyn, officials said. (AP Photo/Seth Wenig)

NEW YORK (AP) — A high-rise blaze that killed a fire lieutenant started in a pinched electrical cord in a cluttered apartment, fire officials said Sunday, adding that the fire had been ruled accidental.

An air-conditioner cord was pinned between a bed frame and a wall in the 19th-floor Brooklyn apartment, where Lt. Gordon Ambelas became trapped while looking for possible victims, Fire Commissioner Daniel Nigro said in a statement as investigators probed the conflagration responsible for the Fire Department of New York's first line-of-duty death in more than two years.

"Though the cause and origin of the fire has been determined, the Department's investigation remains ongoing," Nigro added in a statement. A pinched electrical cord can fray or otherwise become damaged enough to spark a fire if it's near combustible items, especially if heat builds up in a tight space.

Earlier Sunday, firefighters solemnly hung flag bunting at the Brooklyn firehouse where Ambelas had worked for the last several months of his 14-year career as residents returned to the building where he had died. READ MORE