A Chicago-bound Amtrak train with at least 76 people aboard struck a Detroit fire truck Monday that was stopped on the tracks in southwest Detroit.

"When I pulled up, there was an accident. The police was on the track, the fire engine came, he stopped on the track," said Clyde Hunt who witnessed the crash. 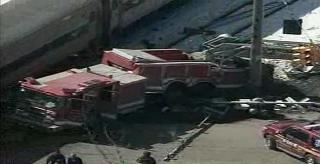 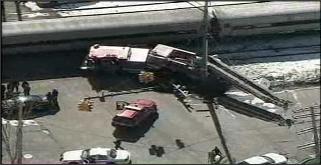 
The fire truck was responding to a crash involving a car and a semi truck near Lonyo Street and Dix Avenue.

Investigators said a firefighter was inside the truck trying to move it when it was hit by the Amtrak train.

"Next thing you know you heard the sirens going off for the train and he just hit the fire truck and the fire truck flew up in the air. It was nothing like I've ever seen before," said eyewitness Bob McLean

Executive Fire Commissioner James Mack said the $600,000 ladder truck and a Detroit police car were there helping a family that had been in an earlier crash that involved their car and a tractor-trailer.

Mack said a firefighter had minor injuries that involved cuts on his body.

Amtrak spokesman Marc Magliari in Chicago said 72 passengers and at least four crew members were aboard the train. He said several people sought treatment for minor injuries like head and back pain.

"All I saw was the ladder, the white ladder, hit the train and just swing around and hit the light pole," said train passenger Aaron Timberlake. "It was incredible."

"She could feel him kind of hit the brakes, but I thought he was just stopping for the station. But then you definitely felt an impact," said Jill Breeden who was on the train with her children to visit their grandmother.

The train made a stop in Dearborn, where some passengers, including Breeden, got off, but then continued on its way to Chicago.


Copyright 2010 by ClickOnDetroit.com. All rights reserved. This material may not be published, broadcast, rewritten or redistributed.

Permalink Reply by Tony on March 1, 2010 at 8:36pm
Even firefighters have idiots on their jobs. NO EXCUSE WHATSOEVER!!!

Sorry I was watching Forest Gump!

Permalink Reply by larry jenkins on March 2, 2010 at 8:15am
I'm on our heavy rail training group. Some points to think about.
1-If you work near or on the tracks you must notify the owner on the rail system and have them slow down to 10 mph or stop if your working on the tracks. Make sure it is the owner (CSX, Southern RR) not AMTRAK or some other carrier just using the system. The owners will stop all traffic where as the other are just paying the owner the use of the rail.
2- Give them a mile marker of your location. This will give them the correct location of you scene. I know of a incident where they fd called and said to shut down the trains coming thru Arlington. Well there are numerous Arlingtons.
3- Send a look out in both direction at least 1 1/2 mile down the tracks to warn of incoming trains. If the look out sees a train, stand next to the tracks and cross your arms. Also lit flares in the track bed will signal a train to stop.

We have a great power point presentation on "do's and don'ts", I'll be glad to send it to anyone who wants it. Let me know.

Could you please forward me your power point presentation?

Permalink Reply by Roy Walker on March 2, 2010 at 3:08pm
Larry please forward me your power point if you have not yet been inundated with requests thanks

Permalink Reply by Scott V Jones on March 2, 2010 at 4:04pm
If possible could you send the powerpoint to my email, funny thing is our firestation is about 10 yards from a major railway. thank you
lebd71@yahoo.com

Permalink Reply by larry jenkins on March 2, 2010 at 6:30pm
I go back to work tomorrow, I will send them out then. No, problem. It's a power point I made for the Washington DC Council of Governments area fire departments.

Permalink Reply by larry jenkins on March 3, 2010 at 4:50pm
Roy, I tried to send the document but it kept coming back undeliverable. Do you have another e-mail.

Scott & Ben let me know if you got yours?