CHICAGO - The burning building had been vacant for years, but the firefighters went in anyway - just in case squatters started the blaze and were trapped inside. Then the heavy-timbered roof and a wall collapsed. 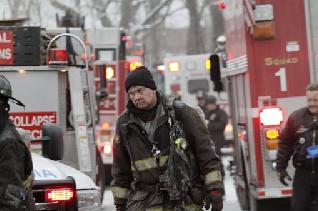 A firefighter walks away from the scene of a fire at a one story building where fire officials say a wall collapsed killing two men and injuring more than a dozen firefighters, Wednesday, Dec. 22, 2010, in Chicago. Wednesday is the 100th anniversary of the Union Stock Yards fire that killed 21 Chicago firefighters. (AP Photo/M. Spencer Green) 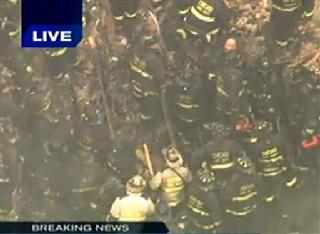 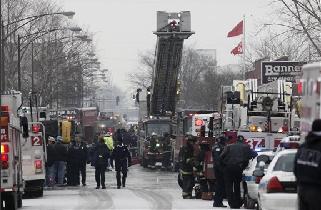 Firefighters and officials stand near the scene of a fire at a one story building where fire officials say a wall collapsed killing two men and injuring more than a dozen firefighters, Wednesday, Dec. 22, 2010, in Chicago. Wednesday is the 100th anniversary of the Union Stock Yards fire that killed 21 Chicago firefighters. (AP Photo/M. Spencer Green)

Four firefighters were trapped under debris, and two of them died on a day that already was among the most somber on the Chicago Fire Department's calendar. Exactly 100 years ago, 21 Chicago firefighters died when a wall collapsed at the Union Stock Yards fire, one of the nation's worst tragedies for firefighters before 9/11.

"We were ringing the bell and calling out the names," said retired fireman Bill Cosgrove, who was at a service honoring the anniversary. "We heard a mayday on the radio that a wall had fallen in."

Most of the firefighters at the service broke down in tears when they found out about the collapse, he said.

"It was beyond disbelief," Cosgrove said. "It was a matter of a few hours and a hundred years later we have the same type of incident."

He said two firefighters at the memorial left to help dig out their colleagues. Other off-duty firefighters rushed there as well, said Fire Department spokesman Larry Langford.

They joined more than 170 other firefighters on duty who responded to a 911 call about the burning building just before dawn Wednesday, Langford said.

He said no one expected the call to be anything more than a routine winter fire.

Although the one-story building had been vacant for years and the utilities had been turned off, firefighters searched the building out of concern that homeless people might be inside trying to stay warm.

The cause of the fire was under investigation, Authorities speculated that squatters might have been burning debris to keep warm.

"The fire had no other way of starting," Langford said.

He said the only people injured were firefighters.

The men killed were Edward Stringer, 47, a 12-year department veteran, and Corey Ankum, 34, who joined the department a little over a year ago. They and two others were trapped under the roof debris.

Two firefighters were pulled out quickly but rescuers had to use extrication equipment to reach the other two.

Every firefighter at the scene on Wednesday "did the best they could to save their brothers," said Robert Hoff, the city's fire commissioner.

"No matter how much experience you have on the job," Ryan said, "a morning like this still takes you by surprise." Ryan said the victims' families "can take solace in knowing that their husbands, their fathers, their brothers are heroes."

Mayor Richard Daley was out of town but issued a statement offering condolences to the victims' families. He was cutting his trip short to return home and address the city.

"Our prayers go out to the families of these two firefighters and to their brothers and sisters in the Chicago Fire Department, who put their lives in danger every day to keep Chicagoans safe," Daley said.

Ankum's brother, Gerald Glover, said he had been with the department for about a year and had a wife and three children.

"He was a great young man. He would do anything for anybody. He would give you the shirt off his back," Glover said.


Copyright 2010 The Associated Press. All rights reserved. This material may not be published, broadcast, rewritten or redistributed.

Permalink Reply by lutan1 on December 25, 2010 at 8:31pm
Chill out Cap- the comment was to be safe in vacant buildings. It's a fair comment, that in no way weighs in or not on the actions of the crew and those in charge.

At that point I just prayed for the fallen men and their families. Having a friend of mine that knew them personally as well as me just feeling for the loss. To our brothers who have fallen, we stand together no matter what. Never forget.