MAPLEWOOD, Mo. - A suburban St. Louis firefighter was shot to death Monday and two other emergency workers were injured in a standoff with a gunman.

The incident began with a report of a pickup truck fire Monday morning in Maplewood, just southwest of St. Louis. When firefighters arrived, someone began firing shots. Police responded, and at least one officer was also reportedly struck.

A Maplewood police officer was also taken to the hospital and was being treated for a gunshot wound to the right shoulder. Clark says his injury is not considered life-threatening.

The third injured emergency worker was taken to another hospital. There was no word on the worker's condition.

Just makes one think about the fact that fires are not our only job hazard. 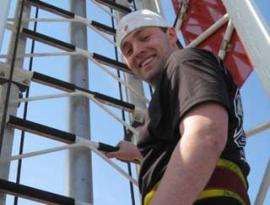 Firefighter-Paramedic Ryan Hummert, 22, was shot and killed as he stepped off a Maplewood (MO) pumper responding to a car fire. Two Maplewood police officers were also shot, with one in critical condition. The bullet struck his badge, which likely saved his life.

Ryan, a recent graduate of the St. Louis County Fire Training Academy, served on the Maplewood Fire Department for only 10 months. His father was a former Mayor of the city.

Maplewood FD is a small career department of 21 members which services the suburban St. Louis community. Notes of condolence can be sent via email t-merrell@cityofmaplewood.com

Permalink Reply by Michael on July 21, 2008 at 2:26pm
Prayers go out for the Family of FF/Paramedic Ryan Hummert and Maplewood Fire Dept. Thank God for Backstoppers. Lets also pray for the two Police officers. Lets all lower our flags at half mass. Lets keep our heads high and continue to protect and serve the people of our cities. Be safe and don't let your guard down.

Permalink Reply by Chel on July 21, 2008 at 5:44pm
I agree with Michael...hold your heads high. Without you, the world would be even more chaotic. I am so sorry for the loss and wish I had some better words of comfort. My prayers go out to you all.

Permalink Reply by don koerner on July 21, 2008 at 6:52pm
i've been in some postions where people were out to get rescue and fire personel we were paged to a man down and it turned out he was waiting to jump some one namely my crew i don't think he was expecting me though police were tied up two blocks from us my partners were two little girls i got out to check on him and he tried to attack me thank GOD he was a little guy and i 'm 6ft 4 inches 240 lbs i wrestled him down got the police then we treated him and chapter51 him it could have turned out alot worse i've been physiclly assulted 3 times on the job and had our ed busted up so although were out there to help people and giving of our selves please everybody be safe you never know what were getting into take that extra second to be sure lets all go home tonight

Permalink Reply by Cody Scott on July 21, 2008 at 7:19pm
My prayers are with Ryan Hummert's family and his department. It's always hard to hear that a brother has fallen in the line of duty, and it's just gut wrenching to hear that Ryan's career and life was ended by a gunman. It makes us wonder what is waiting for us on the next call. My hat is off to Ryan, he served his community and will always be remembered. GOD BLESS

Permalink Reply by Ken Wagner on July 21, 2008 at 8:37pm
God Bless Ryan Hummert for his bravery for the time he was on the job. Bless the rest of the Brothers from his Department and the city of Maplewood as well for all that they have encountered in the last year. Thank you to the BackStoppers organization for what they have done for all Fire and Police personell as well.

Permalink Reply by Galen S. Taylor on July 21, 2008 at 9:29pm
Ryan was a GREAT person to work along side. He was a true asset to this department and will be TRULY missed! His family and Engine Company will ALL be in me and my families prayers. We also wish a speedy recovery to the two officers wounded in the incident. Finally, there is no OFFICIAL word of the gunman’s were abouts. It's been said that he perished in the fire, but no body has been recovered at this point.