so we had a house fire late saturday night early sunday morning, i need opinions and disscussion on where u guys think the rigs should be placed.

Permalink Reply by Theo on February 25, 2008 at 4:57pm
i think that the first engine in should leave room for the ladder truck in from=nt of the structure but that is just me. if the ladder can reach over the engine fine but i wouldnt take the chance of doin it. if u have like 10 ladder trucks at least put on at the front of the structure not beside it . directly in front of it but that is just me.

Permalink Reply by Russell D. Henry on February 27, 2008 at 6:34pm
The first in engine should always leave room for the ladder. As should the second in engine. Trust me nothing is more embarassing than rearranging apparatus in the cul-de-sac of a 3/4 MILLION dollar neiborhood to get a ladder where it needs to be.

Permalink Reply by doug louden on March 15, 2008 at 9:30am
i think the first engine in should always leave room for more trucks to get in wethere it be a ladder or arieal or another engine you can always lay out your attack lines around the trucks for the extior attacks and rescue
if you need to .

Permalink Reply by Lt. Scott on March 22, 2008 at 3:25pm
In my dept. the first engine pulls past the involved structure to leave room for the ladder or second second engine. This placement also puts the primary engine out of the way of any live wires that may become disconnected from the structure durning the fire.

Permalink Reply by SMOKEnPipesJim on March 31, 2008 at 12:31pm
come on guys He said it was a third alarm...In "most areas" this means 3 Trucks, One for each alarm...obviously, for it to go to a third alarm,consideration has to include is it Just manpower or is the building/exposures such that we need a 3rd alarm? (If it was called it was needed..) this being said... 1st due A/B Corner hopefully able to "scrub" the larger part of the A as well as most of the B side... The 2nd due takes the A /D side also postioned to "scrub" whatever is missed By Truck 1 on the A sideas well as Most of the D side and If its accessible, the third truck should be placed on the C side and either in Command or the Company officers judgement either C/B or C/D depending on 1) life safety 2) accessability and egress 3) exposure protection , etc. ... IT goes without saying that a "truck" as we are defining it has some sort of Ladder device, It goes without saying that a ladder device is limited to the length of said device and so therefore has to be as close to the building as possible while Engines have hose in 50 or 100 foot lengths allowing it to be at least as far away from the fire building as whatever hose it carries and in these situations if any engine is within 200 feet of thebuilding the person in charge of that company should be dangled from a ladder harness Over the Fire until it ventlates.... The primary positioning of ladder devices on multiple alarm fires to a "corner" is multi fold, beyond ability to reach 85% of 2 sides the corner also limits the potential for damage should a Collapse occurr, IF a truck is In the middle of side A 30 feet out, and the buildingis a Masonary wall 3 stories, a collapse Will involve the apparatus to some extent , while if placement has the truck at the strongest point in the wall the corners the chance of appartus involvemenet is minimumized ..command vehicles, air supply, canteen wagons, should not even be on the same block... rescues and utility vehicles can be within the block but as far away as possible ..engines should be as far as two or three lengths past or before the fire building preferably on the opposite side of the street or even boulivard hose and equiptment canbe dropped at the location, and The pump can then proceed Past and beyond.... Pre planning Cul de sacs, Dead end streets, and other "tite quarters response areas" requires forethought... and monday morning quarterbacking.... on everyones part... In one dead end street in My resonse area the first due engine would go straight in and the truck would follow taking the fronts of any dwelling at the end right was a vacant lot the engine could pull into IF needed .... The 2nd due engine would report to the hydrant on the ajoining street and hand lay lines through the yards and infact we'd "installed" a removable piece of stockaid fencing after the 1st incident on the street...The fence owner modified the fence to make it simple to drop, when needed...and the Hydrant On the dead end street was on 6 inch a dead end main, while theone of the ajoining street was a 14 " Main.. also a major consideration...
for one event we used a single engine on the street , and two Ladders (A/D) and (A/B) and the third due was on another a joining street prepared to protect exposures from the C side with two portible "stingers" stretched to also cover exposures (C/B) and(C/D), we have a dead end street that depending on the number address the 1st due engine MIght lay into a Private lot rear , through the fence to access the street allowing the front to be totally open for the truck.....pre planing is important and Thinking ahead.. what if??? just say no to tunnel vision.....

Scott. what the hell is the second second engine??? lol is that the third engine??
lol....

Theo Front? beside? read how you wrote it , then imagine yourself responding to "east paduka" at 3 am for a Mutual aid request , You as company officer request instructions and command replies I wantcha in the front beides the side of the front of the building .. You would be like WTF?? ...

Permalink Reply by Don on May 5, 2008 at 2:26am
I am going to go along with couple of other people said, The first engine should pull up ahead of the house and leave room for the ladder, depending on how big the street is and how many alarms you have is also going to limit rig placement at a fire. At a 3 alarm house fire you might be able to get one ladder at the house and might not even be able to get the stick up depending on wires, trees, etc. We had a fire last week and we parked about a block away and the first ladder/quint on scene couldn't get the stick to the roof due to wires in the way so all we could use was ground ladders. I have a couple of pics of that fire and the way they were going to set the stick and have guys climb it that would have been a bad idea and good thing they didnt. A couple of times I've seen a ladder on the parallel street in back of the house, that also depends on what kind of neighborhood your in to. Hopefully nobody gets on me for saying this I'm not a fan of "Quints" hate them, but the other ladder or "Quint" on the other side of town in their district is first due at fires and operates as the first due engine and ladder, I know there is alot of ladders and quints around the country and i guess it all depends on how other departments operate. 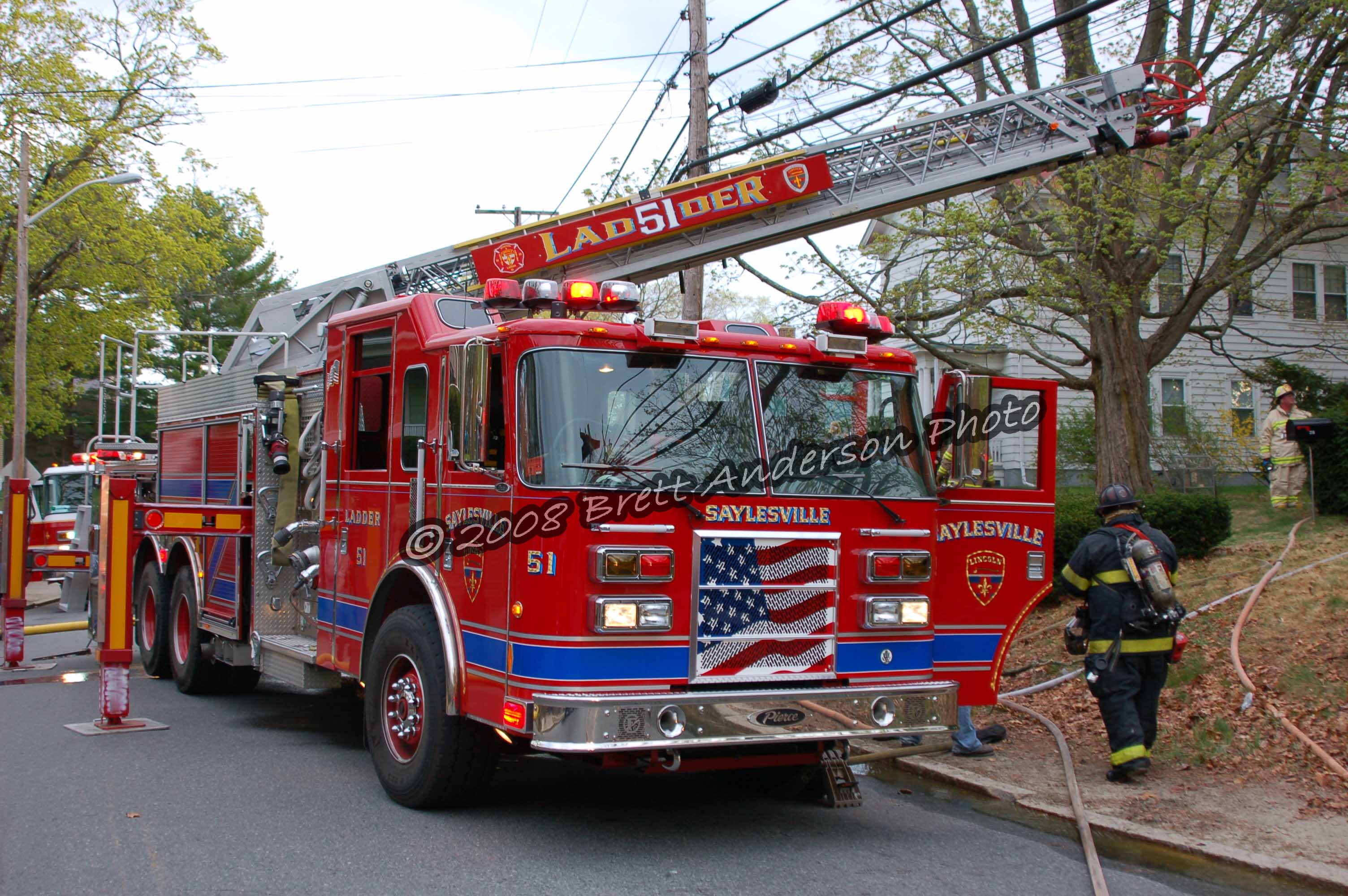 Notice the picure below how close the stick is to the wires.. Permalink Reply by Jason Edwards on August 22, 2008 at 2:38pm
In Cincinnati, we drop 3 ladders on the first alarm. The third truck is the RAT (Rapid Assistance Team) and doesn't get near the building. A lot of our fires are in tight quarters and you only have so much space to deal with. By the time you get two trucks in place (one in front / possibly on the lawn,.. ha!); actually IF you CAN get two trucks in place assuming no electric lines out front - there isn't much room left to do much of anything other than throw ladders to the C side and anywhere the sticks aren't already covering.

As for apparatus placement, much of that is dictated by the plugs and which direction responding units are coming from. However, room is always left for the Trucks in front of the building unless somebody makes a mistake and doesn't pull beyond the structure.

Now, as for your third alarm scenario - there will be red steel and flashing lights on every accessible foot of pavement. Third alarms are normally for manpower and rescue situations or if the weather is such that the Chief doesn't want to beat the snot out of his crews. The placement of any incoming Trucks will be entirely dependent on availability of space. I would imagine you would be planning ahead to a defensive operation and may want to shuffle some apparatus to get them close enough for a surround and drown operation.

That's us... I work part time for a suburban department that uses mutual aid to the same effect as the City, so it looks pretty much the same - just a lot of different names on the trucks.

Some pictures of a couple of 3 alarm fires are available at http://www.cfdhistory.com, which will give you an idea of what it looks like on our end. I will try to attach a couple of them here to save you the hassle, but in case it doesn't work, stop by and check them out. The link is in the left column under "fire photos"