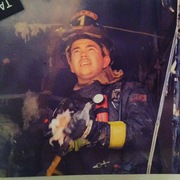 The Africa Fire Mission: A First Hand Look Into Firefighting In a Third World Country

Today I sat at a local bar slightly overwhelmed at all the choices I had. 12 different beers, 30 different liquors, a wonderful bar food selection. A nice climate controlled facility and a theoretically infinite tap water supply to refill drinks and wash the dishes. For the last 15 days I was in the East African Country of Kenya. A country that presents with a population of 47.5 million people and a land area that could fit inside of the state of Texas.

Our first night began with a group of 20 red eyed fire department professionals from all over the country providing many different backgrounds and experience levels. The one thing we all shared was the motivation to make a difference in the fire service of East Africa. We all came together to mentor, train and empower the firefighters from Kenya, a country that has been an epidemic of corruption and poverty for many years. In the last 10 years the fire service climate in Kenya has improved dramatically with the help of many different organizations. The country is currently facing a lot of the same problems as fire departments in the United States, but on a more dramatic scale. The lack of financial support and manpower plague the country worse than any agency in the U.S. could fathom.

For the last 6 months Dave and Nancy Moore of the Africa Fire Mission, a not for profit based out of Cincinnati, Ohio has led 20 motivated firefighters in the preparation of tactical fire training, leadership and community fire prevention courses. Equipment and facilities were requested to be available for the training symposium through partners made in past trips with hopes of making the training as seamless as possible.

A few short months later the first day of the 2019 Kenya Fire And EMS Symposium finally arrived. At the minimal cost of 1000 Kenya Schillings (approx. $10) per department the training attracted over 380 Kenyan firefighters. The instructors arrived bright and early to the Kenyan Airport Authority’s Fire Training Facility to find makeshift tents littering the grounds to act as classrooms. A building on the grounds also provided 2 traditional classrooms inside of a very outdated building that was not equipped with electricity or the appropriate amount of space for classes of this scale. The team arrived to find a facility without fire engines, non existent cars for vehicle extrication training and make believe buildings to provide for structural firefighting drills. This would soon develop into our biggest challenge and presented our team with the reality of the conditions the Kenyan fire service faced.

Our first day came to be a shocking experience. After months of preparation and many emails to the Kenyan Authorities requesting equipment, the team was overcome with aggravation knowing that we traveled halfway across the world to find the equipment we requested for teaching was not secured yet. The robust and motivated attitudes of the American firefighters were met with the  Kenyan motto of Hakuna Matata meaning "no worries."  This led to a friendly clash of American and Kenyan cultures. As firefighters always do, we put our minds together and made adaptations to our lesson plans the best we could. I quickly realized that the Fire and EMS Symposium is the equivalent of FDIC here in the United States. Many Kenyans traveled far and wide some even hitchhiking to the capitol city of Nairobi to attend. The team spent the rest of the day trying to pull this training event out of a spiraling nose dive.

The next day started off about the same, but thanks to some contacts made with the KAA Fire Department we were able to obtain a Platform Aerial, a Rosenbauer rescue truck and some equipment from Nairobi County Fire Brigade. Most of the equipment here in Kenya has been donated by Poland and Japan which posed our next challenge. My colleagues and I soon found ourselves staring into the Kenyan Pumpers in disbelief. All of the discharges read in a different language, pressures in Metric and flows in Liters Per Minute. Traditional pre-connects and hose loads were replaced with quick connect couplings and donut rolls. After a night of some local Tusker Lager and our friend Google, conversion charts were downloaded and we once again adapted and overcame.

Days 3 and 4 were hands on tasks. We were able to obtain a 200 foot life safety rope from the Kenya military to talk though some basic rope rescue drills. We utilized the classrooms as compartments for Vent Enter Search training and went over basic PPE orientation. We used junk laying around the facility to talk about heavy lifting and breaching. We pressured our Kenyan partners to keep working on obtaining some junk vehicles for extrication. Lastly, the pump operations class worked on water supply and duties of the fire engine operator. Things were finally starting to come along.

Day 5 started with much surprise, with the arrival of a solo junk car for us to utilize in a extrication demo and car fire evolution. What we did miss out on was the apparent struggle to get the car. In Kenya there is no such thing as “junk.”  This became very apparent to us on our visit to the informal settlements in Mathare Valley where homes were being constructed out of anything that the people could get their hands on. Even a cruise down the overly congested Kenyan Highways were enough to drive home the fact that these people made riches out of ruins. Everything was re-purposed, refurbished and never just simply thrown away. The Kenya Airport Authority had to actually purchase us a car at market value In promise that the car would be returned so it could be recycled. The team started the day off with some basic rescue techniques to include persons trapped under vehicles, unconventional lifting techniques and basic vehicle firefighting strategies. This offered yet another look into the status of the countries firefighters. It was very obvious that the majority of these firefighters have never participated in a live fire evolution. Safety and incident command were non existent. Talk about one of my most stressful days as a safety officer. Firefighters showed up with improper PPE, running on the fire ground 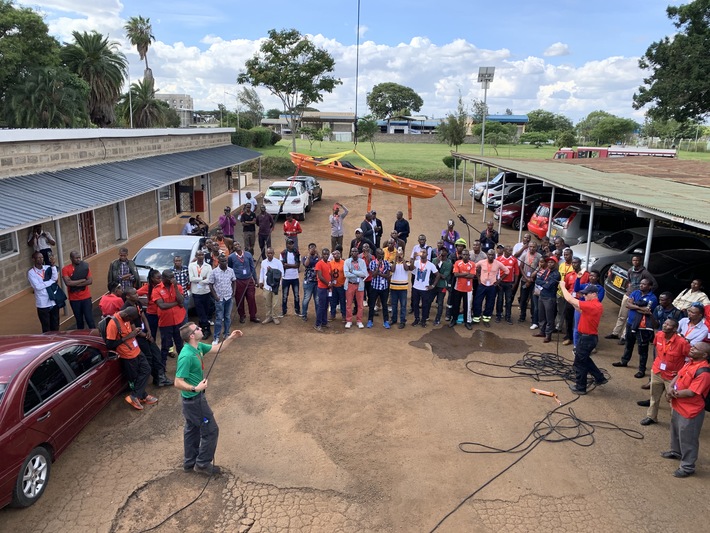 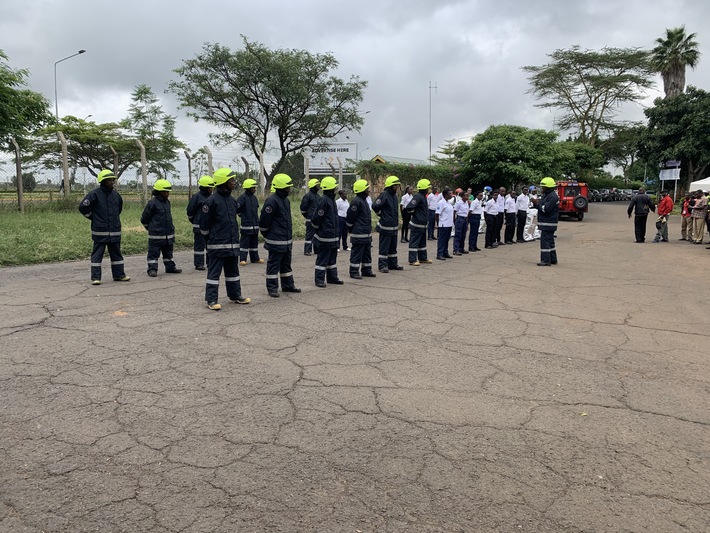 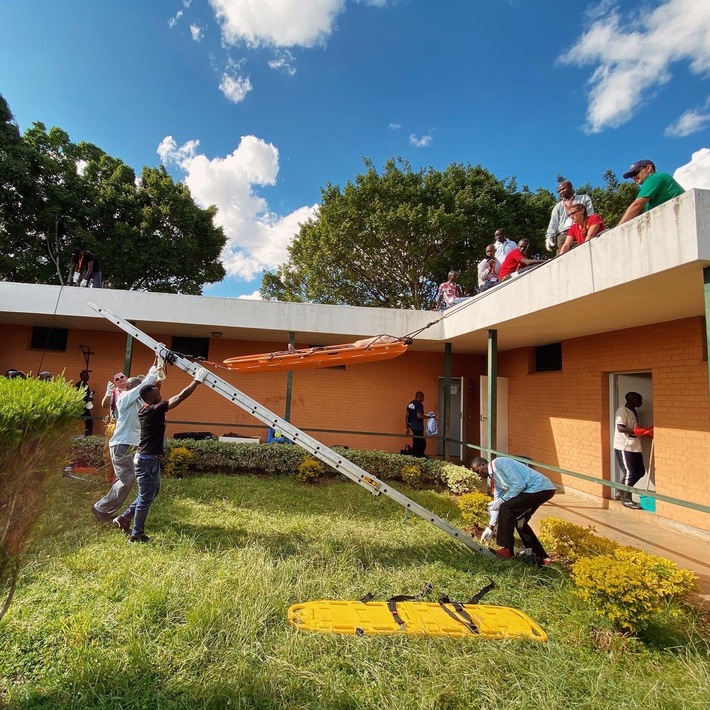 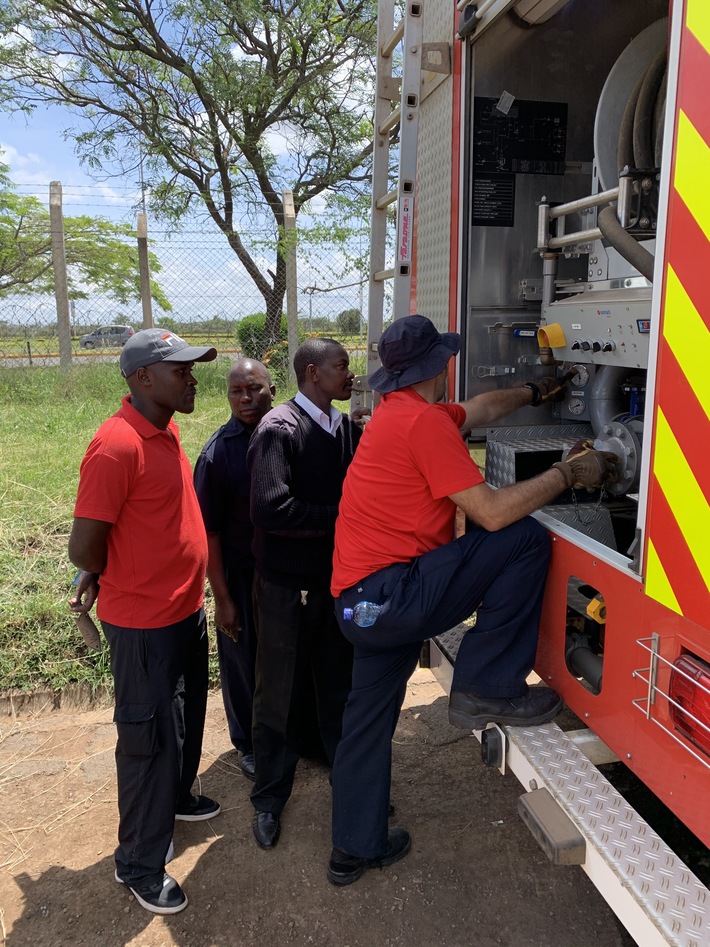 and taking very unnecessary risks. This took a great deal of mentoring and even more patience from the instructors to get these firefighters pointed in the right direction. After a stressful morning the instructors got to have a little bit of fun and put on a extrication demo. This was something that was not trained on often due to the lack of vehicles to practice with. The team demonstrated typical door and roof removals, ending with a dash lift.  During the demonstration one of Kenyans asked how long the team had been working together, as we all knew what needed to be done and worked together to achieve it. The truth of the matter was that we had not worked together at all. It was that we all possessed the same baseline training and skills on how to work together. This simple observation really demonstrates how much help the fire service needs here in Kenya.

We ended the day by putting some of our frustrations to rest by burning what was left of the car as part of a simulated MCI drill that incorporated the EMS classes and fire classes together. The first drill of its kind in Kenya that incorporated fire and EMS together. This led to some very concerned looks from the Kenyan Airport Authority as their car was now cut into 30 pieces and currently on fire. The KAA was trying not to accept the fact that they weren’t going to be able to return the car in the condition that was negotiated.

Day 6 was a fire and EMS competition with crews from counties across Kenya competing in a simulated fire suppression and EMS event. The crews were judged in incident command, hose deployment and overall management of the incident. The scenario was a report of a dwelling fire with people trapped. The responding firefighters were faced with a 300 foot hose line stretch with a working fire in a makeshift hut, with rescues to be made in an adjacent building. The firefighters were to rescue the victims and turn them over to EMS, another first of its kind training. Watching the crews work was almost bizarre. The Kenyan fire trucks take after the British style with no Pre-connected Hose lines and only enough hand tools to properly equip 1 person. Incident commanders operated without radios, firefighters without SCBAs. But just as firefighters always do they adapted and overcame and showed us how they make it all work.


All in all, this was one of the most challenging moments of my life and career and the most rewarding. An 18 hour flight to a third world country to teach firefighters with little to no formal training sounded bizarre then and still sounds bizarre now. 20 firefighters from across the United States and one from Poland came together under overwhelming odds with one purpose and we would all do it again in the blink of an eye. To have this opportunity to spread knowledge and to engage in a brotherhood that truly holds no boundaries has been overwhelmingly humbling.

For more Information or to support the Africa Fire Mission, please visit
Www.africafiremission.org