I am a Paramedic

I am a  a Paramedic ! ! That's cool , right ?. I've wanted to do it sinceI was a kid. I am often asked What do you make? WHAT DO I MAKE?? "I make holding your hand seem like the biggest thing in the world when I'm cutting you out of your car. I can make 5 minutes seem like a lifetime when I am…
Continue

A delegation of Hellenic firefighters will spend a week training with the Union Fire District beginning late October before heading to New York City.

“We have a history of lending emergency support to local communities in the time of need, especially when wildfires ravaged Greece in 2007,” said Grossomanides, the current President of the American Hellenic Educational Progressive Association (AHEPA),…

When a contingent of Hellenic firefighters steps off their bus in South Kingstown next week, Westerly native Dr. John Grossomanides will be there to help make sure their trip to America goes smoothly – at least in Rhode Island. “We have a history of lending emergency support to local communities in the time of need, especially when wildfires ravaged Greece in 2007,” said Grossomanides, the current President of the American Hellenic Educational Progressive Association (AHEPA), currently…

Remembering the 9/11 Heroes of the

A Tale of Two Fire on BACKSTEP FIREFIGHTER

On Thursday September 29, 2011 a Vallejo, California firefighter was burned in the rescue of a paraplegic.  The firefighter made entry into the man’s mobile home which was heavily involved in fire and dragged the man toward safety.  During his attempt he was forced to bail out after suffering burns and a second crew knocked down the fire and completed the rescue.

On March 30, 2010 the Homewood, Illinois Fire Department responded to a report of a fire in a chair in a house.  They were…

The social media world is providing instructors with numerous options to pass on knowledge.  As an instructor, I am often wanting more time in the classroom or on the training ground.  Here’s a way to gain valuable class or training time.

By making a video preview of an upcoming lecture or hands-on drill, instructors can increase the knowledge base of their students prior to them even stepping foot in the classroom or on the training ground.  This will allow for greater conversation…

Here’s a piece brother firefighter Charlie Hillman (Norwalk (OH) FD) wrote about a chimney fire last winter.  He brings up several fireground basics that we all should remember.  Pass it on!

On Wednesday, January 26, 2011 at 0850 hours the Willard Fire and Rescue department was dispatched to a chimney fire.  The chimney fire was reported in a 1 ½ story wood-framed, single family dwelling, ranch style home.  Upon arrival the supervisor initiated incident command and a…

Electing Fireline Officers: Is there a better way?

Suburban Philadelphia, PA -- (October 18, 2011 )  During the next 6-8 weeks thousands of suburban firefirefighters around metro Philadelphia will have the opportunity to decide who will lead their volunteer department during the year 2012. For nearly 300 years, they will determine by 'popular vote', who is best suited to command the department,… 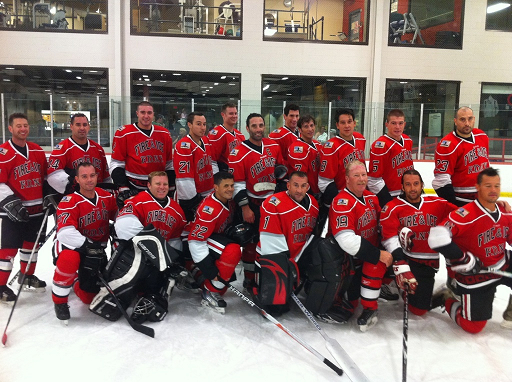 Look at the patch the FDNY Fire & Ice Hockey Team is wearing in this picture. This patch comes from the 9/11 Patch Project (established in December of 2011) and is one of four 9/11 Tribute Patches produced over the years. The FDNY is wearing this patch in the 2011 World Police Fire Games. All 56 members of the Melbourne Australia team is wearing one of…

Tales from a tailboard fireman-firehouse funnies and other stuff

I hope the job has not been changed due to the times we live in. When I worked  (1973-98) no matter what runs we got, having fun at the firehouse was S.O.P.

I was taken once. When I was working toward a promotion to captain I applied for a position in our support services division. It would have required me to go on a forty-hour week and commute every day. I really did not want to get it but had to put in to show I was a company guy. I got a call at the fire house and the voice on the…

The following farm rescue options were learned and passed on to a group of about 70 firefighters in Wakeman, Ohio at the 2nd Annual Farm Rescue course hosted by the Northern Ohio Fools & the Ehove…

Found this 2-part video of a serious fire in Detroit.  This fire originated in the obvious dwelling, then spread to the neighboring duplex.

Some background of this incident and some of the things people will notice:
Continue

Michael's Memories.org  -- Our mission is to provide firefighters that have cancer the chance to take an all-expense paid vacation with their family.

Over the last several years, the diagnosis of cancer has become more and more prevalent in our society.  No profession has felt this more than firefighters. …