Few terms can strike such primal fear and terror as the words "buried alive". Burned Alive....Drowned....both terrible ways to die, but the idea of being suffocated under the weight of the earth in blackness, soil filling mouth, nose, and ears, reaches deep into our souls and stabs at the deepest pit of our stomachs.

For six hours last night, we toiled, shored, and dug for the man trapped in a 12 foot trench under 6 feet of hard, cold, clay soil. Sweat poured from under our helmets,… Continue

The Continuing Chronicles of the FNG(irl): "D'Oh!"

I’ll post a blog about my boot camp experiences later, after my thoughts have been published in The Volunteer Firefighter magazine, so stay tuned for that.

I participated in drill night with my department this week and I never cease to be amazed at how many ways I can find to make a complete ass of myself.
It’s astonishing really. Disturbing, but astonishing. At least this week’s antics didn’t feature any eight-legged crawlies.

I’m still on vacation, so I spent the… Continue

Wow it’s been a while since I have made it to the page to post any thing that’s not good to much work and not enough play makes the Chief a boring and cranky boy. So all you probies out there need to be on your toes. It has been a heck of a month some where around 30 calls this month and on top of unbelievable amount of meetings and yearly ladder and pump tests it has been truly crazy. We were all shocked to hear of the deaths of two Washington state firefighters this is truly a sad occasion,… Continue

Dan Packer was the fire chief for the East Pierce County fire & Rescue who lost his life in the wild fires in California he was a wonderful chief and a wonderful person. He will be missed greatly with respect of his fellow brothers, his wife and family.

How does your volly dept do there attendance policies? Right now are dept. has a 50% rule. We have to due calles, training and meetings. But we dont have very many members that are at 50%. I am looking new Ideas Thanks in Advance

Another Plead For Seatbelt Use --- Why Aren't We Doing It?

Seatbelts: Enough is enough. Buckle up.


On any given day as United States Fire Administrator, I receive an abundance of information regarding the nation's fire service. As one can imagine, some of the information is good — and some is tragic.


It is the information I have been receiving over the past weeks which motivates me to comment today regarding the use – or, more importantly, the lack of use — of seatbelts. It is a tragedy when we lose a firefighter to a… Continue

Hey all on FFN!!! I am the webmaster for my hazmat team's website. We were just recently featured on the History Channel show called Shockwave for our involvement in the T2 labs explosion here in Jacksonville, FL. There are many interesting photos and a video montage of the T2 disaster along with pics of the guys on the site. The url is http://www.jfrdhazmat.com . Please stop by and check it out and while you are there PLEASE click on the advertisers links every once in a while. This helps me… Continue

Hey guys, our fearless leaders are telling us it's time to deploy yet again. I will be gone on monday morning and i will be gone for a while. If you want to email me here is me ship email,

finnelliwa@cvn76.navy.mil
and here is my regular mailing address if any one wants to send other stuff.


Take care everyone and i will talk to you all soon.

Flash player required. Cool slide show, not a lot of action photos, but you get to know 8 House.
A day at fire station No. 8
Courtesy of the Trib, thanks. 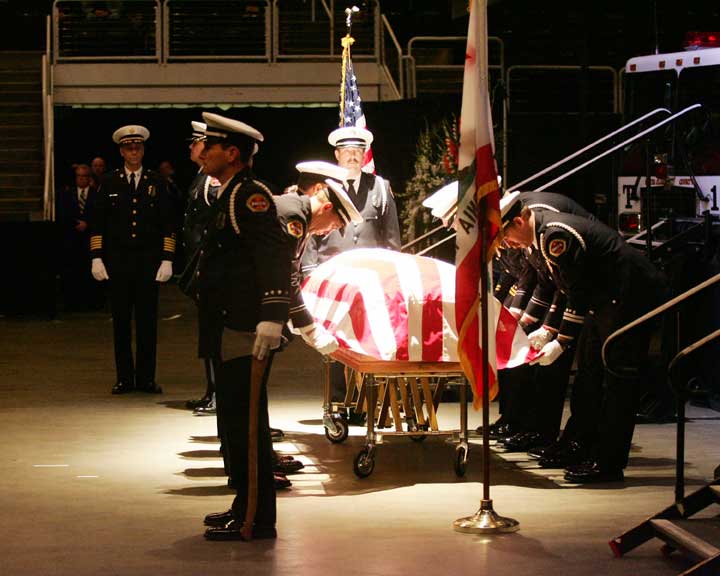 Most civilians would have never known what is involved in a fire or police funeral when a public servant is killed in the line of duty until 9/11 happened. Once the funerals and memorials started for those FDNY and NYPD fallen members, images of flag draped caskets, long processions of fire trucks and police cars, and crisply dressed uniformed personnel were flashed up on TV screens across the country and around… Continue

Does your apparatus have a Good Luck Compartment?

When you check off your assigned response vehicle, does the check sheet have a line item for the compartment full of good luck? Virtually every fire and EMS agency completes vehicle checks on a daily, weekly, or some similar periodic basis. There are compartments full of medical equipment, tools, hose, ladders, or whatever, depending on the vehicle type and how your department sets it up. Is the Good Luck compartment included?

Whats in your "Contract?"

Does your Union Rep , Company Officer or you truly know the “Written Content” of your “Rights, Benefits and Procedures” as related to your “Employment Agreement?” Would you stake your future on it?

All too often we guess - some times we hear “Fire House” table talk. Some people seem to sound vary sure when they tell their versions or interpretations! Yes, we have classes on “Fire ground Tactics” - “Standard Operational Procedures” - “Fire House Etiquette” - and so… Continue

A poem I wrote

I may not look it,but I am a superhero. There are many like me that are from all over this nation. We are in a sense,the gaurdians of all who are around us. We don't have super powers,though sometimes we wish we had. We don't wear tights, and our capes are not flat and shiny, nor do they wave in the wind and we cannot fly. They are strapped to our backs, and they help keep us alive. I wear baggy,brown pants, and a jacket to match. I have a hard black helmet that I use to keep me from harm. I… Continue

This is the complete system for both in station use and truck mounted use.

This unit comes with a 6 tank truck mounted system.

This unit has been very effective at both SCBA & SCUBA operations we have out grown the system and need to upgrade.

The starting price for… Continue

Seatbelts......WHY do we need to keep posting this material? Because we're still DYING

The following message for the Fire Service is from U.S. Fire Administrator Greg Cade.

Seatbelts: Enough is enough. Buckle up.


On any given day as United States Fire Administrator, I receive an abundance of information regarding the nation's fire service. As one can imagine, some of the information is good — and some is tragic.


It is the information I have been receiving over the past weeks which motivates me to comment today regarding the use – or,… Continue

Hey All,
Well I figured I should write a blog-since I haven't written one since I joined. Most of you have been asking me question where I live in relationship to NYC and what the history of the Hamlet of Alplaus is so I thought I'd fill y'all in.

First I live in a little Hamlet called Alplaus, which is originated from the Dutch word "Al-Plats" which means place of EELS-because where the Alplaus creek meets the Mohawk River there are tons-well not as many as the 1700's, but… Continue

CalFire Reports The Facts about the GROIN FIRE

This complete, report comes from the official CalFire incident website. It describes a new, and serious , fire in Central CA

On Wednesday, June 16, 2008 I went to my first ever fireman's Jubilee. I have been too many different types of fire fighter and other emergency personnel parades. For example Memorial Day parades or sometimes July 4 holiday parades. However, June 16 was my first fireman's Jubilee. I got to see all the neat equipment that different fire companies/departments are able to use as well as some of the different types of emergency vehicles that they are using in their departments. It was a real… Continue

OBAMA FOR PRESIDENT AND ADOLF HITLER FOR VICE WOULD BE A PERFECT MATCH.GET A CLUE PEOPLE !!!!

OBAMA FOR PRESIDENT AND ADOLF HITLER FOR VICE WOULD BE A PERFECT MATCH.GET A CLUE PEOPLE !!!!
Body: Letter from a fellow soldier now stationed in Afgan. Interesting read but really not surprising.

Hello everyone,
As you know I am not a very political person. I just wanted to pass alongthat Senator Obama came to Bagram Afghanistan for about an hour on his visitto "The War Zone". I wanted to share with you what happened. He got off theplane and got into a bullet… Continue