By now, we’ve all read or heard about the preliminary results from the FEMA-sponsored study that found one third of firefighters had heart disease that was unrelated to traditional risk factors, such as high cholesterol, and they have a 300% increased risk of dying from heart disease than other segments of the general population. While these results are astonishing, they also provide vital information to… Continue

A decade ago it was accurate to consider large non-fire ems 9-1-1 services as the best examples of high performance systems, utilizing innovation and technology to improve both patient outcomes and system efficiency. Fire-based systems were struggling with unfilled paramedic positions, shot-gun mergers, and unsophisticated administrators.

Protect Yourself: Your Safety, Health and Survival Are Your Responsibility
June 14-20, 2009

Protect Yourself: Your Safety, Health and Survival Are Your Responsibility encourages chiefs and fire/EMS personnel to focus on what they personally can do to manage risk and enhance their health and safety. This year’s theme reflects the need for personal responsibility and… Continue

We Are The Brotherhood!

We have all heard this phrase, but I wonder what does it truly mean to us. For me it is the core of being a firefighter and rising above the selfish mentality of what is in it for me. I've seen people in this service that are both dedicated and loyal to the mission. And I've also seen people that were loyal to themselves and themselves alone. It is imperitive that we stop and take a long look at ourselves and ask ourselves this question. What does the brotherhood mean to me?

Earlier this year, I was sitting in “balmy” St. Cloud, Minn., (-33 degrees F; now I know why those old men were so grumpy) eating dinner with a few firefighter friends of mine. As the night wore on, we each shared our fire service equivalent of a Minnesota fisherman’s fishing story—cold, longwinded and filled with exaggeration. At some point, one of the instructors spoke of his experience teaching recruits and the reward he felt when they eventually achieved success in the fire… Continue

Life Safety Initiatives, Should we or Shouldnt we Critique a LODD?

I have become quite familiar with the age old argument of "Is it disrespectful to talk about or critique a LODD or LODI when we were not there and did not know the specifics?" I think I may have some more info that could hopefully bring fruition to an argument that has been raging for far too long.

Another day in the life of Denise Broesler.

I have to update everyone on the oil tank possible leaking sump pump broken problem.

The well-known oil company came at 8:00 a.m. and saw no oil in my sump pump and it was heartily working. And he used the stick on my oil tank and I had the same amount of oil.

The insurance adjuster was here at 8:30 a.m. and said the same thing.

Last weekend I attended the Everyone Goes Home
Summit at the National Fire Academy. First let me
say that it was my first trip there and it was very
impressive. If any of you ever get the opportunity,
take advantage of this resource and take in the
experience and knowledge offered there, along
with the great history of the area.
Now, on to the Summit and what I have been
pondering since I got back. The purpose of the
Summit can be summarized as an… Continue

When you stop and think about it, a firefighter’s personal protective equipment (PPE) is downright amazing. You carry the air you’ll need on your back, cloaked in fire-resistant fibers that allow you to move through burning buildings; your boots are designed not to melt as your feet encounter burning materials, and your helmet has undergone years of testing to ensure that it affords the greatest protection against impact.

Firegeezer.com has just received the following press release from the USFA:

I am pleased to announce the appointment of Mr. Glenn A. Gaines, a 37 year veteran of the Fairfax County, Virginia, Fire & Rescue Department, to the position of Deputy Assistant Administrator for the United States Fire Administration (USFA); he will also… Continue 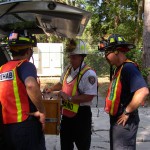 From Firehouse Zen: I am never surprised by the willingness of firefighters to fight for what is right. I have officers that work with me as well as friends throughout emergency services who seem like they are perpetually locked in battle with someone over something, and having been one of those people myself for a number of years, I know how exhausting and frustrating that mode of… Continue

Amazing things can happen on Friday the 13th. Since the last Friday the 13th, I've thought of the day as a good luck day. Today was one of those days.

It started by visiting a very kind penpal who lives nearby and who has an adopted son who is now grown-up. His situation was a bit different than ours, with our adoptions being private and hers through foster care. It's interesting how times have changed.

There is a classic attitude that I've seen in quite a few places throughout my career. It is a side effect from the fact that all of us want to be members of the first company to a fire, but another unit gets to the fire first.

The result is what I call "Second Due Syndrome". If you're not there first, there's a subconscious pressure to drive a little faster, mask up a little quicker, and rush to get into the building before someone else gets all of "our" action.

Who Loves the Halligan?!

In Praise of the Halligan, Part 2: More inventive uses for the truckie’s go-to tool 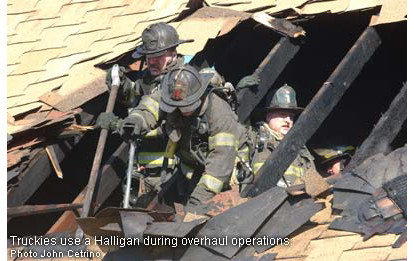 My January column, “In Praise of the Halligan,” p.… Continue

I finally got to ride in our sweet new ambulance Tuesday night. After countless bone jarring ambulance transfers in a 4WD vehicle that would have eventually resulted in breasts I could kneel on, we got a 2WD that offered a smooth ride and steps you can negotiate with a wide butt and short legs without looking like you just fell off a Mardi Gras float. Yaay for me!

It still has that 'new ambulance' smell, which is kind of like the 'new car' smell, if new cars came with extrication… Continue

New Suicide Technique Could Kill US.


Person Down in Auto/New way to commit suicide


Recently a new way to commit suicide has been discovered by mixing two chemicals that can be bought over the counter at local stores. They are Bonide - a sulfur spray used as an insecticide for fruit trees and hydrochloric (muriatic) acid. Once mixed, the chemicals produce heat and a flammable, noxious gas that causes the subject to pass out and the… Continue

Throughout my career I have battled the bulge, and lost on a few occasions, but also spent the majority of it in pretty good shape.

That was until I came back after 4 and a half years of working in the private sector.

So when I decided to rejoin the brotherhood I was in decent shape from driving mud and staying physically active. Unfortunately....when I got on the job things were pretty relaxed and I was back to getting a steady check that meant i could eat a little… Continue

Tools of the RIT Trade

Is your crew familiar with what tools & equipment rapid intervention requires?

We’re only about a month or so away from having some nice weather that will support outdoor drills. But until then,… Continue

We only go if its life threatening?

My opinion!!!!! Who desides what is life threatening? I have heard depts comment that they only go to EMS calls that are life threatening. Calls come in and status changes with in minutes. Broken legs are really amputated, Difficutlty breathing, is not breathing. (I do know that it can go the other way as well)Some citizens dont have any medical knowledge at all. When they call and somone says they are dying, how do we know with out going there that they are not? I just dont feel that a Dept… Continue