NFPA Vacant Building Fire Report Issued: What are the Risks? 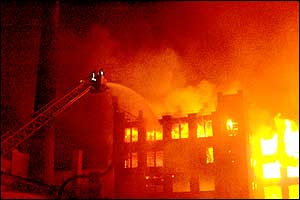 These fires resulted in an average of 50 civilian deaths, 141 civilian injuries, and $642 million in direct property damage per year. Based on annual averages for 2003-2006, the 31,000 reported vacant structure fires accounted for 6% of the 520,100 structure fires, 2% of the 3,125 civilian structure fire deaths, 1% of the 15,200 civilian structure fire injuries, and 7% of the $9.0 billion in direct property loss. These statistics are national estimates of fires reported to U.S. municipal fire departments based on the detailed information collected in Version 5.0 of the U.S. Fire Administration’s National Fire Incident Reporting System (NFIRS 5.0) and the National Fire Protection Association’s (NFPA’s) annual fire department experience survey.

We seem to do a lot of things at times out of common practice and repetition, you know; “We’ve always done it that way….” syndrome. There’s a resonating theme that is making its way around the fire service dealing with going to a defensive tactical posture at vacant or unoccupied structure fires. This command posture leads to limiting interior operating engagement, while promoting a high degree of risk management.

With that being said, there are also plenty of opinions on these types of policies as such, since this type of tactical effort may be contrary to the local “culture and traditions” of the responding agencies and may be a hard pill to swallow, since we’re in the job of “ fighting ALL fires..” take the time to look over some of my insights on Tactical Entertainment HERE and HERE

Here are some basic definitions to keep us all on the same playing field;

Vacant; refers to a building that is not currently in use, but which could be used in the future. The term “vacant” could apply to a property that is for sale or rent, undergoing renovations, or empty of contents in the period between the departure of one tenant and the arrival of another tenant. A vacant building has inherent property value, even though it does not contain valuable contents or human occupants.

Think about this: As a responding company, you arrive at the scene of a vacant or unoccupied structure. The building’s construction features and systems have inherent risk associated with the occupancy, (as is the case with nearly all of our structures and occupancies).

Your company determines that you’re going to go defensive, even though you probably could make a reasonably safe entry and engage in interior structural fire suppression.

Would there be any repercussions in your station, battalion/district/community or organization if you took this tactic? What are YOUR personal thoughts on this form of risk management?