Is Race Still a Factor in the Fire Service?

I just read on Stater911 about a FF in Austin TX who was fired for posting naked pics of himself online. He did this on his own time and was fire because it showed poorly against the Austin FD. I don't know if "size" was a factor. But in DC a FF was cooking naked in a firehouse, intoxicated off duty. Nothing has happened and his name has not be given out. Now the reason I bring this up is because 30 African-American FF filed a grievince agianst the DCFD for whites being less punished then blacks for the same instances.

In my time I've people come up and talk to me about issues in thier firehouse from being called nigger or hearing nigger/black jokes to be denied driving privliedges. Just recently I heard of a company that had one African-American and while at the company banquet members thought it would be funny to serve him and HIS WIFE, chicken and watermelon. They came to me because I attended the state and county meetings and spoke my mind. While a member of the Recruitment and Retention committee I tried to have them place our booth at the Hispanic and African-American Festivals besides the state fair. No luck. I asked if companies wanted me to contact loal black churches with them to try to get members no luck.

I don't paint everyone with the same brush. I've had some very good experiences in the fire serivce. I'm, always welcomes where ever I go whenever I say I'm a FF from Delaware. I've had more bad experiences with the public then the fire service but I know there are problems out there.

I ask, "does your company or department reflect your community. Comning from a predominately Black department I'm proud of the fact that we have more white members then whites in the community.

My question is - As you look at your department, does it reflect the community? If not have you approached people of color to get them to join, if so how, if not why. Do you think the members of color are treated fairly in your company or department?

And lastly, do you think there is still a racial issue in the fire service today?

I could go on and on about this subject. I do believe that this situation is hurting the Fire Service all over the country. Now don't get me wrong, this is an issue affecting all sides, not just one group. I have no problem with someone getting hired on based on qualifications, test scores, etc. I do have a problem when entrance exams are downgraded to ensure everyone passes. (First we have to acknowledge the fact that there are also white people who are helped in this situation as well) I can't really go too deep into the story due to the fact our department has internet watchdogs, but I'll do the best I can.

When I took the personnel board test for FIREFIGHTER, the county had put in this new test to ensure EVERYONE had a fair shot. By this I mean the test was an opinionated personality exam. Basically there was NO right or wrong answer. How do you determine who is the best candidate for the job? I'm not sure either. Another interesting note is the fact that our department is in dire need of PARAMEDICS. So much so that we are about to have to consider shutting down ambulances. Remedy to this of course would be to hire more Paramedics. The only issue is the fact that majority of your Paramedics are white. Our union was told be the powers in charge, that there will never be a majority white rookie school in our department. So now I guess the public is no longer the primary concern..... Am I wrong?

Ultimately, I don't care if you're white, black, asian, male, female..... All I care about is that you can and WANT to do the job.

I've never been for quota's for black or white. I'm for fair hiring. When I tested for Wilmignton Del FD I passed the written but not the physical (eye test). Testing seems to be the biggest issue with paid departments. NYFD which I pointed out earlier with an absurdly low rate of all minorities to Philly with an absurdly high rate of minority hiring. I look back on my hiring at the 9-1-1 center when I was the only minority out of 80 people.

But what about the volunteer companies where no records are keep or made public? This is one of those subjects that have no answer. Someone will always be mad, disappointed or disgusted.

You're right.... this will always be an endless discussion.

Ya. Hopefully someday it just won't matter anymoer but I feel like that may be a ways down the road.

As far as the department reflecting the demographic of the community, no it does not.  Both departments that I work for(full time and part time) are in municipalities that are predominately Black and minorities make up less than 1% of the departments collectively.  For whatever reason, the minorities who I know personally that have applied; their applications get lost or discarded by the administration.

I talk to kids of all colors, races, sexes, and religions but not to many are interested in putting in the time with Paramedic school and the Fire academy in order to begin to apply and test to become a Firefighter/Paramedic. Quite a pickle that we are in, huh?

Permalink Reply by Mike Schlags (Captain Busy) Retd on January 10, 2012 at 4:20am
Can you imagine what it's like to be Muslim and working in the fire service. Any other religion or nationality or ethnicity would pale in comparison. For you to do your job, I would imagine that you really have to know your job well.
You alone have done more as far as blowing away any stereotypical generalization of what a Muslim firefighter is all about. Having read most of your posts, I find you to be a great guy and someone I would love to have worked with during my career. You have my respect and friendship forever brother. Your replies are often thought provoking and wise. You are a leader here on the FFN. Thank you for being you. It's what makes the USA such a wonderful place.

I didnt read every post, so if someone posted this picture already I apologize. 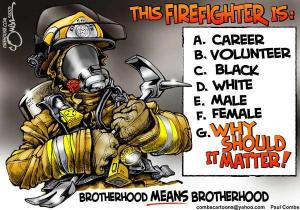 Here is my feelings towords racism in the firehouse, or even sexism for that matter.  I dont care what color your skin is, what sex you are, ar what religion you practice, we are family.  We all work together to save lives and it shouldnt matter.

My chief is female, has been chief for a few years now and she does an excellent job of it, and I never once think that sex plays any roll in her gaining chief, it was her skill and knowledge, and I respect her.

I have worked with all colors and religions, what matters most to me is their ability and dedication to our fellow human beings.  On top of that, I am color blind.  Seriously, I have been color blind since kindergarten when they tested me, so I truly do not see colors, I see the person.

I humbly accept your compliments and friendship but it is you who are the true leader not just here on FFN but in the Fire Service in general.  I have learned so much from you and your posts.  Your character is one that I admire and strive to adopt.  It is truly a blessing from Allah to have come across you in my life and I thank you sincerely for all that you do.

As far as being Muslim in the Fire Service, it is difficult at times but not impossible.  we all know that change in the Fire Service is slow at best so to change the social programming of decades and generations of miseducation, fear, and ignorance takes time but the pay out(in friends like yourself) is well worth it.

Yes, you are correct. I do have to do my job better, quicker, cleaner, faster, harder, sharper, and smoother than the average man just to break even but that is the card we are dealt being minorities and I strive to meet and succeed at the challenge.

If I had one wish it would be for everyone to see Islam and Muslims for what we truly are and give us a chance to explain our faith.  You Cap have provided me with just that and I am forever grateful.  Thank you and keep teaching us young whipper snappers the right way to live life!

The graphic you provided is spot on. One of the sweetest things about the United States of America is that we are one nation under God, indivisible, with liberty and justice for all. Indeed, brotherhood means brotherhood.

And lastly, do you think there is still a racial issue in the fire service today?

If there are still racial issues in this country then of course, it's going to be reflected in the fire service, as well as pretty much any other  source of employment.

Racism, racial bias, bigotry and discrimination exists, maybe not as prevalent or as out-in-the-open as in the past (colored toilets/water fountains) but it's there.  Scratch a white any person and you're going to find a racist (except, of course, the one who proudly claims, 'some of my best friends are...')  And it exists not just in the form of racism, but religious bigotry as well as sexual discrimination.

It's about education and isolation.  Keep to your own kind and keep your education level low (so as not to be exposed to new ideas or people).  The more you can keep new ideas, people, religious beliefs and skin colors away from you the more you can blame them for your problems and for problems in the world.  After all, if you don't know any blacks, chinese, africans, muslims, jews or gays, you certainly have no need to like or respect them.  And they are always easy targets to blame for whatever ails you.

And since most of the people in here (FFN) appear to be white, (most likely) christian, and predominantly male, most people aren't going to know what it's like to be discriminated against, picked on, blamed or considered second-class...well, unless it's a volunteer vs. paid discussion.

America is supposed to be the land of freedom.

Freedom of race and to be proud of your ethnicity and heritage.

You make a good point about education and isolation Jack.

I believe many people are subconsciously afraid of diversity and that added to how things can be portrayed in the media (not just the local news but everything from newspapers to movies, music, and what we see on the internet), longstanding stereotypes, and other factors, causes our society to be less apt to accept and understand others who are different.

Like I have said in earlier posts, I hope someday we can get to where all of the diverse things that make up not just the USA, but the whole world are accepted and people are looked at by what kind of person they are and not by what they are (race, religion, orientation, etc)