Our fire department has the Sigtronics model U45D intercom/radio control unit installed in several apparatus. In at least two apparatus, the intercom portion of the units failed and the volume control knob no longer functioned (spins continuously without hitting the "stops" at either end).

Radio operation through the units was not affected.

After disassembling one of the units, we discovered this was not a failure induced by abuse/misuse, but a manufacturing defect. We also found a quick, inexpensive fix.

Figure 1 depicts the 2k-ohm volume control potentiometer as we found it on removing the top cover of the Sigtronics unit. Look closely and you can see that the rear portion of the potentiometer (black disk) sits at an angle relative to the circuit board. Also note the break pattern of the blue potentiometer body. This might not have presented a problem in a static installation of the unit in a stationary location. However, in a fire apparatus installation, the vibrations and "bouncing" associated with roadway (or off-road) vehicle movement and/or engine vibration exacerbated the tension on the potentiometer until the breakage show in Figure 1 occurred. (We found this identical breakage pattern in both failed units.)

Investigation revealed the configuration of the potentiometer in the circuit made it possible to place the volume control in "full volume" condition by simply jumpering the wiper lead to the resistor lead conveniently located nearest the outside edge of the circuit board. 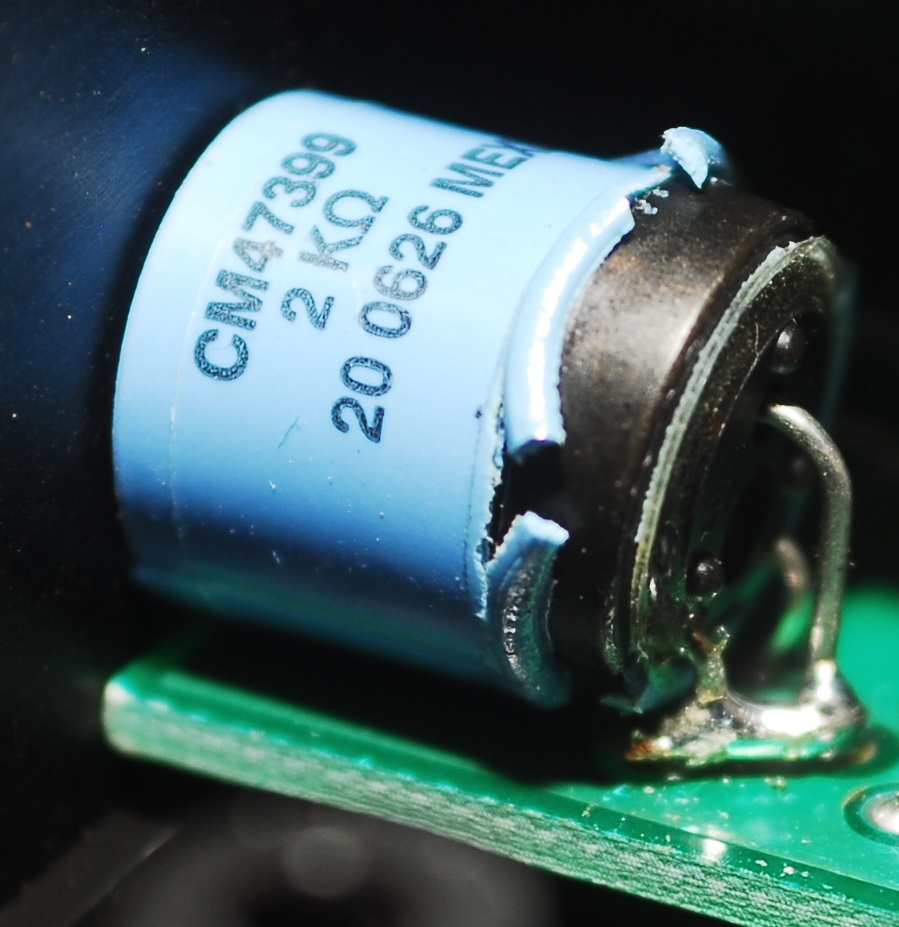 We found the jumper repair not only adequate but desirable for our application. Each headset in the system has its own volume control knob. It is therefore operationally expedient to place the Sigtronics unit at full volume, which allows each user to set headset volume to his own needs or comfort level.

Persons with the requisite skills can affect full repair by replacing the potentiometer with one of appropriate mechanical dimensions and resistance value (2k ohms).

We do not know how many Sigtronics units were affected by this defect. Our department might have the only two (so far) in existence. However, if your department uses 45D or other Sigtronics intercom models and the intercom portion has failed as described, this defect is the likely cause.

Very good Don! Awesome work. Sad that workmanship of these sets lacks..um.well workmanship! Certainly not much pride in the job. Did you send these findings to the manufacturer? I would wonder about a warranty if such a defect was not caused by your people. It does look like a rather easy fix, and even delving deeper into the project, and removing the board, unsoldering the defective pot, and replacing with a new replacement pot ensuring proper fit would certainly be the most effective means, rather than settling for an "ok fix".Without knowing the circuitry and having a schematic diagram showing what the shorted resistor is intended for, might cause failure somewhere else in the unit. But it might not too! Nice investigative job. :)

The units are 2+ years old, so I doubt warranty would apply.

I am debating whether to contact the manufacturer, as it could be we just got a couple of bad units and the problem might not exist in others.

As for the "expedient" fix, we actually like them better this way, as reducing the overall volume of the intercom system should NOT be an option.

I evaluated the circuitry sufficiently to rule out the jumper causing problems elsewhere. The only thing one might consider is removing the broken pot entirely to prevent vibration causing the metallic wiper to re-establish contact with the resistor element.

Sigtronics Corporation has been manufacturing communication equipment since 1974. Producing quality products has always been, and continues to be our number one priority.

We have seen the type of damage illustrated in your picture rarely, and from testing know it can only be caused by large force impact. If you hit the control knob on the potentiometer with a large enough force in the direction of the shaft (into the unit) you can blow the inner workings of the pot right out the back. This can be seen in your picture showing the back of the potentiometer pushed out about 1/8 of an inch. It takes a large force in just the right direction to do this. Something like SCBA tank thrown up against the unit? I suspect that you have the Sigtronics units mounted in a similar place in both vehicles where they can be easily hit by something heavy.

The potentiometers used in Sigtronics intercoms have the connection leads pre-bent in a fixture then installed parallel to the circuit board. We have been using this manufacturing technique for many years without significant incident. It encompasses thousands of units over 30 years in many different applications including higher vibration environments that occur in fire apparatus.

One note on the fix you came up with. While it will do in a pinch, I would have it repaired at your earliest convenience. Sigtronics can also provide loaner intercoms so the apparatus does not need to be removed from service during the repair.

The reason for the volume control on the unit is so you can set the overall intercom volume for conversations between the headsets. You should set the volume as low as you can so the background noise picked up by the microphones does not get excessive. The individual volume controls on the headsets have a limited range and are meant just to balance out the differences in individual hearing.

After 30+ years in public safety telecoms repair and installations, I am not a fan of circuit board mounted user controls. A component is going to meet a quick failure. While remote wiring requires more of the rig to be disassembled in order to install, having the user controls in a location suitable for on-the-go ergonomics and the user interface in another location seems to be the best advantage.